The July 4 holiday is almost upon us, and with that comes the celebratory fireworks. While fireworks displays can be fun and dazzling, they do have an effect the environment. Not everyone shares an equal enthusiasm for this tradition, and some fireworks options are more ‘friendly’ than others. Read on. 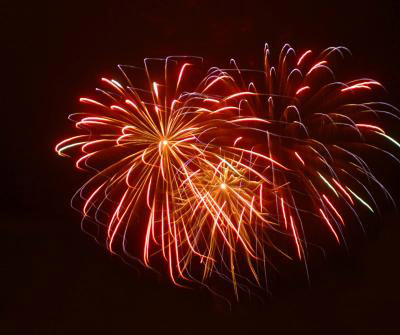 Traditional fireworks are propelled by gunpowder and colored with heavy metal colorants. Toxic chemicals from the fleeting displays can eventually make their way into soil and groundwater.  A 2006 study by Richard T. Wilkin et al, conducted at a municipal lake site in Oklahoma, found that elevated perchlorate levels in surface water spiked significantly after a display, not returning to background levels for 20 to 80 days following the event.

The environmental group Coastal Environmental Rights Foundation of La Jolla, California filed suit last week against the City of San Diego and the annual Fourth of July celebration event planners to stop the fireworks display planned for the La Jolla Cove. The group contends that California Environmental Quality Act (CEQA) protocols and reqirements were not met in approving the event over a piece of sensitive coastline.

Who’s the best known early adopter of eco-friendlier fireworks? It was actually Disney in 2004. Driven to action by neighbor complaints, Disney launched a program to use cleaner burning fireworks that use compressed air rather than gunpowder as an accelerants for lift-off  in it’s hundreds of yearly fireworks displays. However, widespread use of greener fireworks for environmental reasons are still taking a back-seat; these newer displays are not yet cost competitive.