More information on the results of the Berkeley Earth Surface Temperature group can be found on their website, here. Team members include Art Rosenfeld. 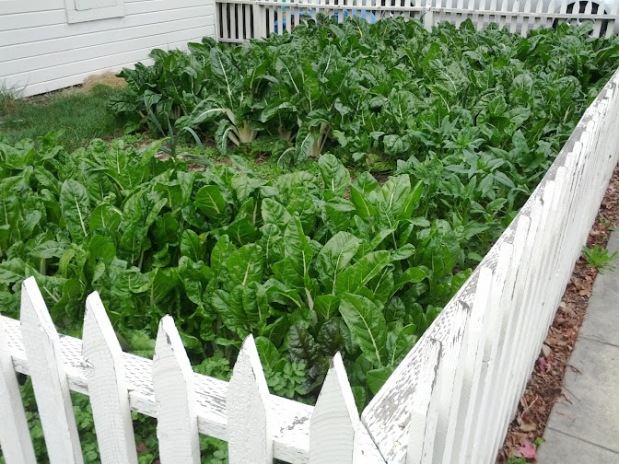 Photo: A front yard full of chard in Berkeley, CA, by Anna LaRue

Starting April 3, 2012, the campus community can visit the myPower website to see real-time energy use data for 57 campus buildings. … These dashboards will provide evidence of the cumulative impact of the energy-saving measures you and others in your building take, demonstrating that small actions can add up to a large impact.  The website also provides information about proven ways to save energy in offices, labs, and residence halls.

The screenshot above shows the dashboard for Wurster Hall, which houses the Department of Architecture, among others. I’ll be checking out some of the other campus buildings over the next few days. 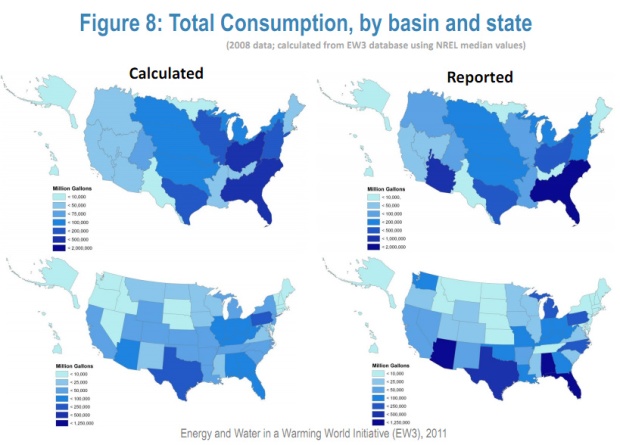 Image from the report appendix

The Union of Concerned Scientists just released a new report on the effect of power plants on freshwater systems.  “One plant had to curtail nighttime operations because the drought had reduced the amount of cool water available to bring down the temperature of water discharged from the plant,” the report says. It quotes Kent Saathoff, a vice president of the Electric Reliability Council of Texas, who said last month, “If we don’t get any rain between now and next summer, there could be several thousand megawatts of generators that won’t have sufficient cooling water to operate next summer” (New York Times Green Blog).

You can read the entire report here.

Sewage overflow is the No. 1 source of pollution for New York’s waterways, says Leif Percifield, a graduate student at the School of Art, Media, and Technology at the Parsons New School of Design… Percifield’s dream is to place simple sensors at each of New York City’s 490 “combined sewer overflow” points. The sensors will be primed to send out text-message notifications every time the city’s drainage maxes out (Grist).

UC Berkeley has begun work in its quest to significantly taper its campuswide water use. The campus is aiming to cut its water usage by over 65 million gallons by 2020 (The Daily Californian).

Last week, I attended the 2011 BERC Energy Symposium, on the UC Berkeley campus. There were a number of interesting folks both speaking and attending, so I’d like to give you all a sense of what was covered.

I attended a panel on energy and behavior on Friday morning – I will post some thoughts on it in the next few days.

Coverage from The Berkeley Science Review:

You can find more information about BERC and this year’s expo and symposium here.

There’s no such thing as free parking.

On Thursday, December 12, Nancy Skinner will speak on the UC Berkeley campus on state and local efforts to halt climate change. Nancy Skinner is Berkeley’s representative in the California state assembly, and she is a founder of ICLEI. Assemblymember Skinner will also discuss the launching of ICLEI’s Cities for Climate Protection Program, the national movement of mayors and cities working to reduce greenhouse gas emissions.

Dan Kammen, who leads the Renewable and Appropriate Energy Laboratory at UC Berkeley, was just appointed by the World Bank to be its first Clean-Energy Czar.

The New York Times Green Inc. blog posted an interview with him today:

Q – One of the chief criticisms of the World Bank is that, even as it has increased funding for renewable energy and energy efficiency projects in developing countries to $3.3 billion annually, it continues to provide significant funding for carbon-intensive projects like coal-fired power plants. Do you see a need for the bank to maintain financing for those projects?

A – This is really at the heart of the tension between traditional development — meaning more energy, more access, irrespective of environmental damage — and the emerging environmental mandate that we’ve got to cut our greenhouse gas emissions so dramatically. So you get cases like the very controversial $3.5 billion investment in coal in South Africa, and at the same time, how to build the emerging economies around solar, biofuels, wind, etc.

You can read the entire interview on the New York Times website.

UPDATE: There is also an interview with Dan Kammen posted on Grist:

Q – The climate bill process fell apart in Congress this year and it seems like the U.N. process isn’t headed for a big treaty either. How can things actually get done?

A – There’s no simple answer to that. When we look back at the Montreal Protocol and CFCs, people thought that process looked impossible until a few companies and countries realized that cleaning circuit boards without CFCs might actually save them money and be more effective. A couple successes turned a story that looked like it was going to be a failure into one that we all look back now and say, “Oh, that was easy by comparison.”

I’m not sure exactly how many successes we need to tip the balance so that a big treaty is possible, but no group is better positioned than the World Bank to facilitate them.

You can read the entire interview at Grist.org.

On Tuesday, August 31, I was in the audience at the Haas School of Business at UC Berkeley as Peter Darbee, CEO of Pacific Gas & Electric Co., responded to moderator questions about the energy industry and the company’s stance on climate change.

An ellipsis (…) indicates that I was not able to capture the words or thoughts skipped. Moderator questions are paraphrased. Responses are included as accurately as possible – punctuation choices are mine. The moderators were Bev Alexander (BA) and Joey, a student.

SmartMeters – I saw your talk at the CPUC  – there were protesters saying Dumb Meters. Talk about the backlash.

In California, there has been a tier system of rates… Tiers depend on how much power you use. Originally the tiers were not so steep…all of the rate changes have been amplified in tiers 3-5. In Bakersfield last year…had 17 days over 100 degrees. The previous year had 6… And I’m talking about in July. So folks get rocketed into the higher tiers. There were some folks who didn’t have SmartMeters… Some had SmartMeters for a year and hadn’t had issues until that July… Then they held hearings… And this whole outcome is an inadvertant result of government, freezing the first 2 tiers.

… But PG&E could have done better at communications… We kind of assumed they were infrastructure… We assumed that people didn’t give a lot of thought about the meters on the side of the house… We were wrong.

In California, it’s a very activist state – you came out in support of AB 32, PG&E advocated decoupling, used to support shareholder incentives for energy efficiency, has a very aggressive RPS at 33% – combined with the federal level, there’s potential for overlapping and conflicting mandates – what works? Why these positions?

I’ve done a lot of thinking about climate change…and where is the public on climate change…and they have concerns it may happen…but they don’t want to pay a lot…have to be very attentive to the cost concerns of our customers. What this says is energy efficiency is a no brainer.

…AB 32 envisions a cap and trade system…time to transition to cleaner technologies…for utilities benefits pass through to customers.

Climate change is a planetary issue, and if a state rigs the system to help themselves, it gets expensive… If we do it in a very expensive way, the people of Ca will revolt, and it will set us back tremendously.

How did you teach your kids about energy efficiency? What advice do you have for future leaders on climate change?

Write your obituary… The way you create transformational change is you put a stake in the ground for the future…an attractive future…then plan from future back to present. You have a choice.

This exchange was followed by a question and answer session with the audience.

I like to remind myself and my clients that just meeting code means it’s the worst building I’m legally allowed to build.