A “clean” MRF receives just mixed recyclables and separates them.

And I have just learned about “wet” MRFs, which use water to separate items in a dirty MRF by density, cleans them, then dissolves organic material for anaerobic digestion.

The sorting in a MRF is accomplished with some automated processes and also manual sorting of materials into bins.

Yes, it’s true. While I was waiting for a TransBay bus near Civic Center at 2 am a couple weeks ago (not something I do often), I was thinking about energy efficiency.

I took the following (terrible) cell phone photo of the Federal Building from Market Street:

And I wondered, “Why are all those lights on?”

There are a number of reasons that entire floors of lights might be on in a building in the middle of the night. Reasons could include:

But the San Francisco Federal Building is touted as a high-performance low-energy building. And someone else has previously noticed lights on late at night. So what’s going on?

I’m going to see what I can find out in the next week or two and will write a follow-up post. 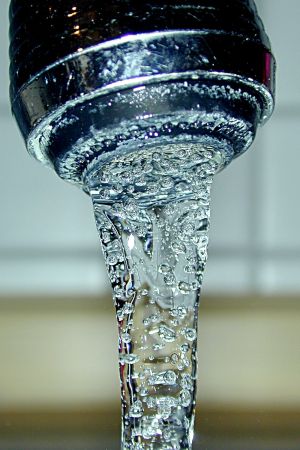 In honor of  World Water Day March 22, here is a list of  online Water Conservation Calculators:

This calculator is less a predictor of actual water usage than a comprehensive look at daily habits that affect water use.

Manufacturer Kohler, has a simple online calculator to estimate your home water usage against the U.S. average

This is a more nuts-and-bolts calculator that will let you plug in your actual water usage (from your water bills) along with home appliance and landscaping details to come up with an overall “water budget”.

A calculator that extends past showering and watering the lawn to detailed information on food consumption by food-type.

Just wanted to share the news that Noelle’s recent article on the World Resources Institute service called Earthtrends Delivered has been highlighted on EcoPressed.

EcoPressed features “the best environmental blogging across the WordPress community.”

World Resources Institute has a useful and interesting service called EarthTrends Delivered. By signing up for this free service you can explore dozens of data charts and maps online and receive email digests of new data as it is produced by WRI in any of the following:

On Tuesday evening, March Berkeley City Council heard an analysis of the recycling program managed by the Ecology Center.

According to East Bay Express,

The city paid the southern California firm Sloan Vasquez $85,000 to figure out how to plug the deficit. The consultants said in taking over the recycling, the city should replace the Ecology Center’s two-person trucks with one-person trucks, except on hilly and narrow roads where one employee working alone would be dangerous. Reducing the number of drivers and overhead incurred by the nonprofits would save millions of dollars, they said. They also recommended layoffs in the city’s solid waste division.

Currently, the nonprofit Ecology Center manages a city contract to pick up paper, glass and plastic. The Conservation Center, also a nonprofit organization, is charged by the city with processing and buying back recyclables. Urban Ore, a for-profit business, salvages and sells reusable items. City workers pick up garbage, and green and food waste. … …

The point where the city and nonprofit workers agreed was that outside profit-making companies such as Waste Management should not have the commercial franchises, as they do now, to pick up recyclables from Alta Bates Hospital, UC Berkeley, Bayer Corporation, Kaiser Permanente, Pacific Steel Casting and more. Ricky Jackson, a rep for the government employees’ union, said the city could make money taking on this work.

Councilmembers want more input from the nonprofits, city workers, and the Zero Waste Commission at their March 22, 2011 meeting.

UPDATE: There is a detailed report on many of the speakers and comments from Tuesday’s Council meeting from the Berkeley Daily Planet (always to be taken with a grain of salt) here.

To give some more background on concerns about the study, on Tuesday Berkeleyside carried a story about the report on recycling in Berkeley:

An independent report commissioned by Berkeley to assess how it could save money on its waste and recycling operations has recommended that the city terminate its contract with the Ecology Center which started the nation’s first curbside recycling program here nearly 40 years ago. The report’s proposals have been challenged and its methodology criticized by the Ecology Center, as well as by at least one third-party waste management expert.

Concerns about the study include the following:

[Martin Bourque, Executive Director of the Ecology Center] says he sees significant problems with the assumptions made in the Sloan Vazquez report, principally that the city would be able to save money by bringing operations in-house. Citing two specific examples he says: “The city waste supervisor is already overburdened and they are suggesting doubling his workload. And, at the moment, the city doesn’t carry any overheads but that will increase their costs by 26%.”

Berkeley resident Steven Sherman, who is President of Applied Compost Consulting and has consulted for the city on waste matters, believes the Sloan Vasquez study has “terrible policy implications for the City”. In a March 3 letter to the Council he outlines why he believes the City should not accept the report’s analysis as valid.

Berkeley’s Zero Waste Commission has also condemned the study, describing it, in a February 28 report, as ”incomplete and missing information, cost-benefit analyses, and a lack of an adequate and inclusive process”.

You can read the entire article on Berkeleyside here.

While attending a recent talk given by Paul Kephart, president of pioneering ecological design firm, Rana Creek, I heard an interesting assertion: Green roofs can improve the performance of solar photovoltaics by up to 30%. This would be due to the ability of the green roofs to lower the ambient temperature surrounding the panels, thereby boosting efficient operation.

Plants + solar PV may be an exciting possibility for synergistic systems on rooftops, especially in dry climates like California.

I have been looking around for studies or more information about this and came up with just a few articles that are linked below. Portland State University has a study underway on this topic.