The bill was contentious and narrowly missed passage in September of 2010. If it had passed, the state of California would have been the first in the nation to enact such a ban; However, plastic bag bans are already in effect in several California cities including Palo Alto, Malibu, Fairfax and San Francisco.

Too many retail bags in general?

California is not alone;  there are other single-use plastic bag bans in effect in a number of cities across the country, as well as increased effort to reduce the impact of retail bags in general.

The Florida Department of Environmental Protection released a Retail Bags Report in February of last year. Among the findings is that only 12% of plastic bags and 37% of paper bags are re-used or recycled by Americans.

Apart from plastic bag bans, legislating retail bags can also come in the form of recycled content requirements, bio-degradable requirements, phase-outs, fees or taxes (although none have been successfully enacted in the U.S. to date), or combinations of impact-mitigating actions;

For example California mandated in 2007 that all retail stores over a certain size mark bags to indicate take-back and provide recycling bins for their customers, as well as re-usable bags for purchase.

The  map from the Florida Department of Environmental Protection Retail Bags Report shown below, highlights the locales that have retail bag legislation in some form. See the full interactive map here. 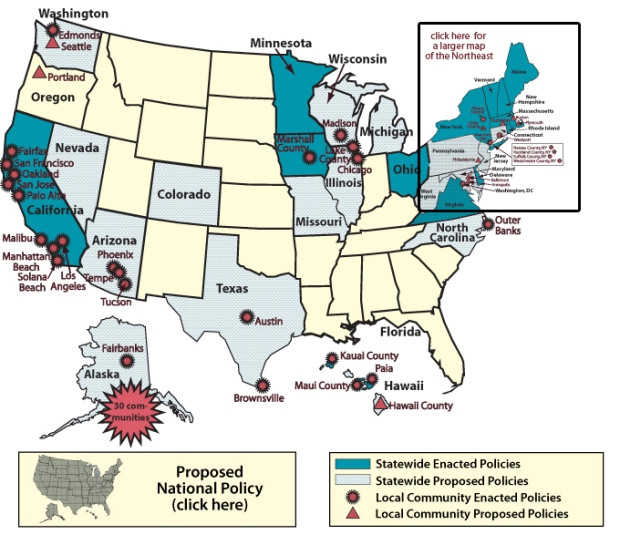 An interesting site on plastic bags and their many laws: